Reproduced here , with thanks to hindupost.in.

In a new low, the recent cabinet reshuffle by the Central Government led to extremely cheap sexist attacks on Ex-HRD minister, Smt Smiriti Irani. While the cabinet saw some other shifts too, personal sarcasm and sexist attacks were seen only on Smriti Irani in social media and even mainstream media. There have been questions raised on her performance through out her tenure, mainly because of her humble educational qualifications, but most of the attacks from left and so called ‘secular’ spectrum have been unrelated to her performance and very personal in nature.

Left leaning politicians, journalists, spokespersons have indulged in attacks quoting her previous acting career, her alleged proximity to leaders of the ruling party and insulting her personally. From being called a mere ‘nachnewali‘ by Congress’ Sanjay Nirupam to being questioned on alleged proximity to the PM, Smriti Irani has seen it all.

As soon as the reshuffle was announced, we saw some leftist columnists resorting to sexist mockery of her new role as textile minister. Even women resorted to derogatory sexually suggestive sarcasm. A left leaning columnist tweeted this

The icing on the cake was the crass sexist comment by JDU politician Ali Anwar on the whole issue when he remarked that Smriti Irani has been shifted to textile ministry to help cover her body. This is the rock bottom level of sexism that Bharatiya politics has reached to :

#SmritiSexismVictim: JDU’s Ali Anwar makes crass comments against @smritiirani. Says, she has been given textile dept to cover her body.

While many ordinary citizens took to twitter to criticize blatant sexism hurled at Irani, the champions of feminism (leaning towards left and perceived secular handles) haven’t objected much. There were no tweets by the likes of Congress spokesperson Priyanka Chaturvedi who herself created a furore after a suggestive remark against her during a TV debate. Being a woman, one would have expected Priyanka Chaturvedi to be more empathetic and condemn crass remarks like what Ali Anwar made, but it was not to be.

#SmritiSexismVictim: JDU’s Ali Anwar makes crass comments against @smritiirani. Says, she has been given textile dept to cover her body.

JDU Ali Anwar must b sacked immediately but shameless @priyankac19 is defending him. #SmritiSexismVictim

When mainstream media and ‘secular’ politicians can launch such disgusting sexist attacks on a self-made, independent woman with impunity, it is not surprising that their acolytes and cheerleaders on social media slander and abuse right-wing & Hindu nationalist women on social media.

There seemed no end to cheap sexist thrills by media houses on this issue but twitter fought back : 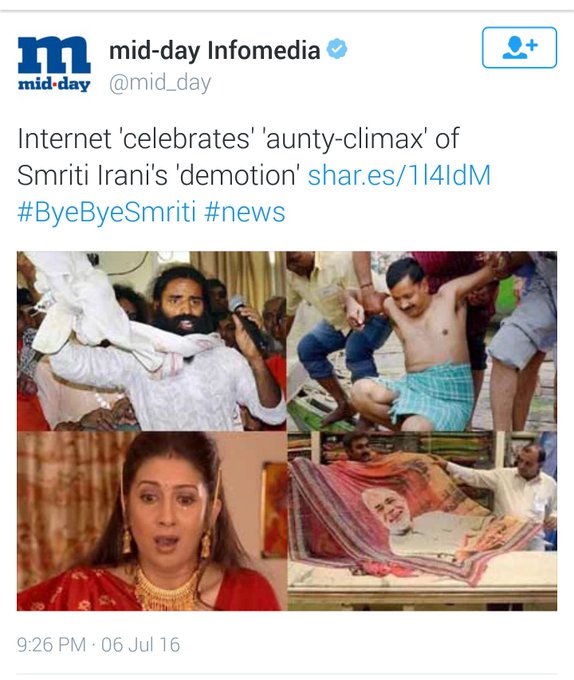 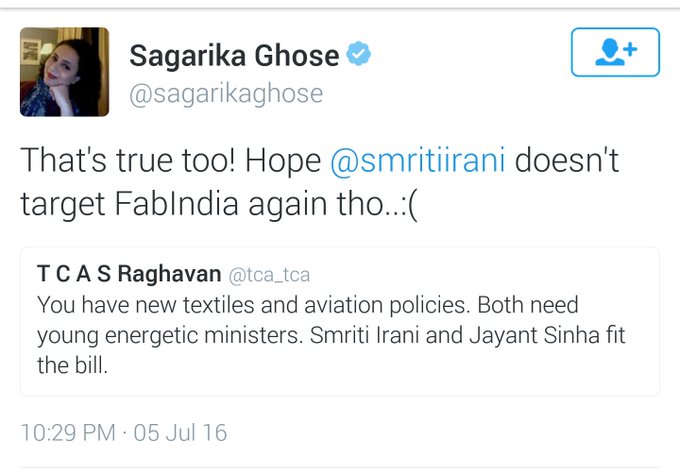 Smriti Irani started her career as salesgirl at Mc Donald’s. She is bk to sales of kapda. She wl start wth Modi printed saris

The same media elites who love taking pot shots at Smriti Irani quake in their boots before writing anything even remotely critical of Sonia Gandhi or her daughter Priyanka Vadra. What explains these double standards?

Smriti Irani has been at the center of media controversies simply because she replies to them aggressively and takes distorted journalism head on. She was also in charge of a ministry which had the task of cleaning education from the grips of Nehruvian and Marxist ecosystem, thereby balancing the school text books and policies in education. She also gave a direct and tough fight to the most powerful dynastic candidate of INC, Rahul Gandhi in 2014.

Though many nationalists kept showing their displeasure with her tenure in HRD for slow efforts in correcting history books and bringing parity in policies/laws like RTE, the left politics has been continuously blaming her for what they call ‘saffronization’ without evidence.

Performance apart, the recent spate of sexist attacks is a cause of concern and great shame. Its heartening to see people have started criticzing this blatant sexism. As Sandip Ghose says in this write-up in DailyO ‘Smriti Irani is that bahu who all bhabis love to hate’!