Lt Colonel Shrikant Purohit has been granted bail in the Malegaon Blasts 2008 case. The SC bench cited that the maximum punishment that can be given for the crime (if proved) is 7 years, while Col Purohit has already spent almost 9 years in jail. The SC bench also cited that there were contradictions in the reports given by ATS and NIA. The NIA had however opposed his bail.

The history of this case reflects how an accused can actually be tortured crossing all boundaries of Human Rights and can end up serving more jail term than actually prescribed by law as punishment for a certain crime (if proven). There are more than a dozen accused in this case, and it can be fairly concluded that most others must have been tortured too. Another major accused, Sadhvi Pragya has already been given bail. Sadhvi Pragya had disclosed parts of her torture story mentioning the cruelties that she went through that have rendered her spine permanently damaged.

Colonel Purohit had an exemplary performance record. He was a top notch intelligence officer, and this is clear from this report. He had created an effective intelligence network and was probably gathering the kind of intelligence that was beyond the expectations of various in the army and politics. It may never be known but it can be logically speculated that it may have been any of his intelligence inputs, either regarding the fake currency racket or the extent to which Dawood and ISI had penetrated our systems / organizations, or Kashmiri terrorists travelling in the cars of politicians, which may have led to his incarceration in this case.

The way it all began is in itself a story of great injustice and the detention was actually illegal to begin with. Not only his movement order paper was hidden from him, the first violence in the custody was carried out by none other than a fellow military officer, Colonel Shrivastav. Colonel Purohit was told that he was to go to Delhi but later he was diverted to Mumbai and wasn’t even allowed to inform a single member of his family. In fact, Colonel Purohit filed RTI application to understand the rules and procedures of how and who can modify the travel orders. But the information that came about was not satisfying going by the old reports.

The fact that he was a serving officer at that time was not paid heed to, he was bluffed and taken to Mumbai and what followed there was a series of severe torture. Madhu Kishwar, founder of Manushi.in had interviewed Col Purohit’s wife, who had narrated the kind of torture he went through. From 29th Oct 2008 to 4th Nov 2008, Col Purohit was illegally detained and severely tortured. The pattern was repeating itself, Sadhvi Pragya too had said that she was illegally detained from 10th Oct 2008 to 23rd Oct 2008 and was severely tortured.

This detailed report carries various statements, letters and complaints by Colonel Purohit himself, here is an extract of how he himself explains the start of the torture :

“I was interrogated by this combined team for almost two hours on the night of 29/30 Oct 2008. Till then all the members of interrogating team was talking to me with a respect deserved by an army officer. After initial two hours of questioning, it was Colonel Shrivastav (Director Military Intelligence – 9) who suddenly sprung from his chair and initiated a brutal physical assault on me. He slapped me on my face at will and continued slapping me and started kicking me all over the body with his shoes on. Colonel R K Shrivastav then started pulling my hair on head and chest as well. At this stage the other interrogators, including the Indian Police Service cadre officers of Anti Terrorism Squad and Intelligence Bureau officers, joined him in physically assaulting me. My face was totally swollen then. Colonel R K Shrivastav’s actions of physical assault on me made the Police and Intelligence Bureau officers shed their inhibition of carrying out physical torture of mine, a serving army officer. Colonel R K Shrivastav then stood on my feet and legs as I was tied to a chair and inhumanly started twisting my nipples and my private parts (genitals) with all his strength. Colonel Shrivastav once again started hitting me on my face and even boxing me with tight fists on my back. Colonel Shrivastav was holding and pulling my hair on head while the other Indian Police Service officers tortured me. I was in absolute state of shock and totally shattered by this physical assault carried out by Colonel R K Shrivastav, (Director Military Intelligence – 9).

This nightmare of physical assaults hitting, slapping, twisting of private parts, tying me to a chair, standing on my legs, feet coupled with dirtiest possible abuses on my mother, wife and sister continued unabated. After four days of continuous beating and torture, on 02 Nov 2008, Colonel Shrivastav ordered the Police to handcuff me. This was breach of privilege for a serving army officer and it was not police officers but insistence of Col Shrivastav which caused the same. I was handcuffed and remained in that condition till 04 Nov 2008.

The sequence of beating and brutal torture was intermittently on with Colonel Shrivastav abusing me about my mother, wife and sister. He kept on threatening me that if I don’t own up my involvement in the Malegaon Bomb Blast, he (Colonel Shrivastav) would strip my mother, wife and sister and make them parade naked in front of me. Police officially arrested me on 05 Nov 2008.”

After this, the case shifted from one investigation agency to another, without a final charge sheet and trial never began for more than 8 long years. In fact, after this illegal detention, when Col Purohit was checked in military hospital, the reports mentioned permanent damage to his knees, his knee reconstruction surgery had fallen apart because of torture, parts of his hands had lost sensation because of nerve damage.

One more essential link in this case, Sudhakar Chaturvedi, still awaits bail. He was a registered intelligence operator which Col Purohit had cultivated. He was accused of keeping RDX at his home which was allegedly supplied by Purohit. I have had various discussions with the lawyer of Sudhakar Chaturvedi over last 2 years, needless to say that he was also tortured like all other accused. However, not only this detailed report on Manushi.in explains how other army personnel caught the planting of RDX at Sudhakar’s house, there are other witnesses also who later claimed that they were coerced to give statements that Maharashtra ATS sought.

There were very serious allegations raised by Col Purohit’s wife, Aparna Purohit that she was also severely humiliated and threatened of dire consequences by Hemant Karkare and Col Shrivastav to give ‘required’ statements. Another serious allegation was that Col Purohit was pressurized into making a confessional video (probably passed on as narco tests going by old news reports, it seems mostly lead by Tehelka & Times Now then, a lot of such news pages have gone into archives / proxy servers now), which was shared with media without first testifying the confession in front of a magistrate. Most of the idea of ‘Hindutva Terror’ and Col Purohit being guilty was based on Swami Aseemanand’s ‘confession’, from which he retracted more than once later.

Below is the short jaw-dropping interview of Colonel Purohit by NewsX, where he says ‘torture is a sober word for what he was put through’, and throws light on various other aspects of the case. No wonder his knee reconstruction surgery ( done before his arrest in 2008) fell apart, he says that he was suspended from horizontal bars and stretched on opposite sides  :

Two major things that glaringly point out that this narrative of ‘Hindu Terror’ may have a political conspiracy manufactured by UPA, under Sonia Gandhi in center and Sharad Pawar in state of Maharashtra are, the illegal detention and severe torture.  It must be noted that several Muslim accused in Malegaon Blasts 2006 were acquitted in April 2016 because both the NIA and Court said that there was no suficient evidence to implicate them. They spent 10 years in jail, but nobody was illegally detained and went missing for days, nor were they tortured like Colonel Purohit, Sadhvi Pragya and others. Who can forget that Sharad Pawar openly took ‘credit’ for coining ‘Hindu Terror’ in a political speech in 2009!

That UPA was into this totally, is also suggested this very recent explosive statement by Defence expert Danvir Chauhan on NewsX : 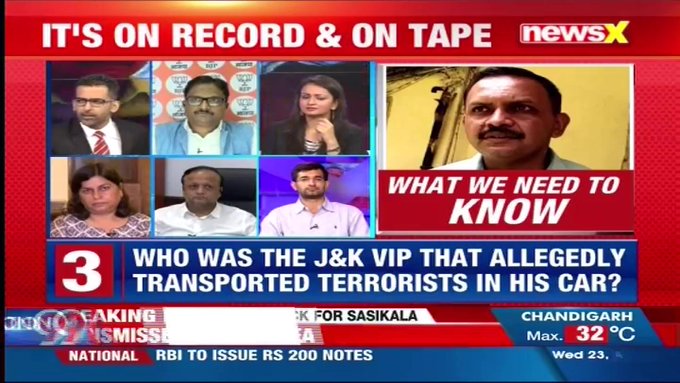 The crux of what Mr. Chauhan says is ‘the then Army Chief, General Deepak Kapoor (of Adarsh scam fame) was course mate and close friend of Hooda (Ex CM of Haryana) and prevented Army Court of Inquiry papers from reaching Col Purohit.

In fact, the counsel of Col Purohit, Mr. Harish Salve, has clearly mentioned various important points in this conversation with Republic TV :

That MCOCA was quashed by the Supreme Court after killing so many years of Colonel Purohit in prison, that several army personnel testified in favor of Colonel Purohit, that a key witness said that he was forced on gun point to testify against Col Purohit.. More than this, the most important point Mr. Salve says is ‘When a shrill political narrative is built at the very beginning of a case, the investigation is invariably affected’.

However, the bail finally came through. The judgment too clarifies certain important points : 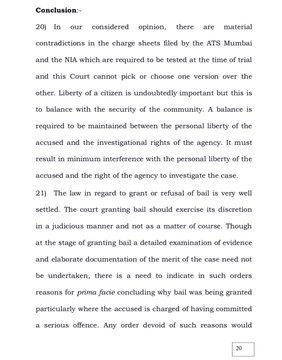 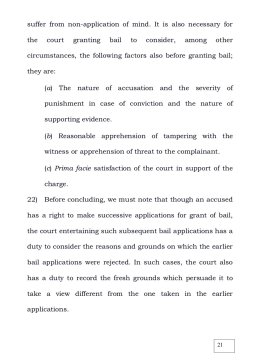 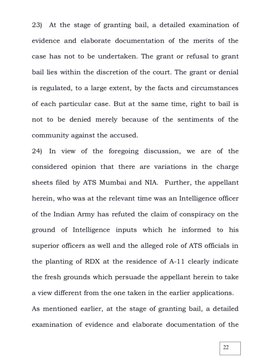 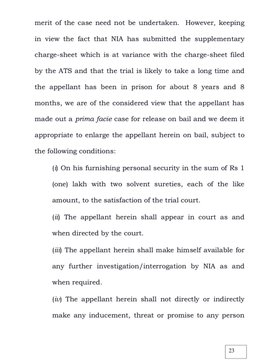 Important portions of the 25 page Supreme Court judgement giving bail to Lt. Col. Purohit after 9 years. Read how he was denied justice.

The court said that the variations in the charge sheet filed by NIA and earlier reports by ATS suggest that the trial will take a long time to begin and the accused has already spent close to 9 years in prison, hence it is a justified ( or probably delayed) case for bail.

Colonel Purohit still speaks highly of our nation and army, is proud to serve both. Says an officer has nothing but honor to protect. None of the accused have agreed to involvement in the crime in front of a magistrate/court, the deterioration in their physical health is clearly visible when you see them. That Human Rights Commission and every NGO which fights for ‘rights’ and ‘justice’ slept through in these 9 years (on this case) indicates that this whole case was a political conspiracy.

All sources of information have been embedded (given links of) at relevant places.